Sarus, srs or the shadow tongue, is the language spoken by the YuYu.

The language utilises the 7 notes of the musical octave, and as such it can be written with notes and played on a musical instrument, in addition to being written in glyphs, Latin text and spoken. The word "Sarus" itself (written as srs) means "language" in Sarus. If the syllables are converted into numbers, sarus/srs spells 525.

Sarus are spoken by the YuYu, the cross-dimensional shadow people known stealing people from various worlds as they sleep, and bringing them to their shadowy realm to work as slaves.

Those are the letters of Sarus, called syllables. Every Sarus word is a combination of one or more of those syllables. There are seven 1-syllable words:

After those, we move on to the 2-syllable words, of which there are 49:

Next come the 3-syllable words, of which there are 336.

Sarus words are written as a combination of any of the 7 syllables. Example:

Sentences are written just like in most other languages, with a space separating the words, like so:

The language of Sarus is a very limited one, but it is not limiting. One important rule is that there should not be two or more words that mean the same thing. The vocabulary of Sarus is based some of the 1000 most common English words, a huge percentage of which are synonyms or words very similar to others. In Sarus synonyms do not exist. For example, the words strange, weird, bizarre, odd and queer all mean pretty much the same thing, so in Sarus there is just one word that expresses them all: mrf.

Certain words are also mixed where it's logical and works in context:

There are some overlapped definitions in Sarus. Examples:

Incidentally, the latter example also has a double-up definition, meaning that the Sarus words fml and lmf each have multiple definitions:

Therefore to say in Sarus that the texture feels rough, is the same as saying it feels dirty. Usually the context helps. If someone is on a boat and the sea is choppy, and they were to say: "l ltm m lmf dms", it's highly likely that it would be understood in context as saying "the sea is rough today", and not "the sea is dirty today".

Sarus, being heavily based on Solresol, have 7 "syllables" in the entire vocabulary. Those are the 7 major notes of the musical octave: Do, Re, Mi, Fa, So, La, Ti.

Words in Sarus comprise of one, or a combination of several, of the syllables. For example, three syllables Do, Re and Mi when strung together become the Sarus word “doremi”, which translates as ‘the same’. The major obstruction with Solresol was that words needed to be separated by gaps. Therefore, when spoken or played on a musical instrument, any phrase was a stop-start affair, sounding very disjointed. This also made the language very slow, making it cumbersome and inefficient as a language for everyday communication.

The pronunciation system of Sarus is similar to certain other languages by using something similar to syllable stress. The first syllable of every word (called the Prime Syllable) is stressed slightly. Furthermore, the prime syllable is pronounced a little differently to other syllables in the same word. The combination of those two rules make the start of each word easily recognisable, so that by using this method, words may be spoken without gaps separating them. The pronunciation for the seven syllables when used as a word's prime syllable are:

A Sarus word in its entirety is made up of anywhere from one to 5 or even 6 syllables. For example, the word faedmir means ‘almost’ and consists of the syllables: Fa, Do, Mi, Re. Fa is the prime, and do mi re are the latters. This word is thus pronounced as follows: Fadəmərə (faa-duh-muh-ruh). When spoken, the ‘ə’ of the final syllable may be dropped. Not only does this streamline the word, but it also makes the ending recognisable: Fadəmər (fa-duh-mur)

The syllable ‘Re’ can become difficult to pronounce when it appears twice in a row. For example the question “Am I coming?” translates as follows: Rerə Dorə Rerədə. To make this easier, a double ‘re’ makes use of the consonant ‘k’. The second of the two is changed to ‘kə’, so that 'Rerə' becomes ‘Rekə’. Therefore, the above question "Am I coming?" is much easier pronounced: Rekə Dorə Rekəde. But there is still a double 're' between Dorə and Rekəde. When the sentence is said aloud, the latter ‘rə’ in Dorə is followed closely by the prime Re in Rekədə. To combat this, whenever necessary, 'k' is is used for the problem, however the 'k' consonant cannot be used on a prime syllable, so with this change and the final syllables dropped, the sentence is pronounced as: Rek Dok Rekəd.

The use of 'k' is for pronunciation purposes. When writing the abbreviated form of Sarus words, for example "ssf dr rmtr" (give me permission) the double 'r' remains. When writing, there is no k in abbreviated Sarus. Sarus words contain various combinations of vowels amongst the consonant syllables. Those vowels are inconsequential to the meaning as the language is based on the solfege syllables D R M F S L T, and so they alone are the important parts of the word, and essential for correct translation. Therefore, “remitur” means the same as raemytir, romutar or even rhymethehour. Each of those words contain the exact same Sarus syllables in the same order: RMTR. The vowels in a word are merely padding.

Getting the syllables correct is important, because this is the skeleton of the word. Apart from speech and writing, Sarus can also be translated to colour, melody (being based on the 7 notes of the musical octave) and hand signals for deaf people.

The word 'la' in Sarus is simply for the definite article, not for the indefinite article. 'la' means "The" and nothing more. It does not mean "A" or "An".

The definite article changes the subject from just a random thing out of all that exist to the particular thing that is being referred to.

Triple syllables are never used in Sarus. So ddd, rrr, mrrr, tttf, etc. don't exist. There are many words in Sarus that contain double syllables though. Using a standard syllable to pluralize (for example, just adding d at the end), would give a triple syllable in every word ending with dd. For example, rdd (edge), rddd (edges). This goes against the 'no triple syllable' rule. So by making the pluralizing syllable dependent on the final syllable of the word, there cannot be clashes, or rule-breaking exceptions. If t is the final syllable of the singular, then d will be the pluralizing syllable. Overall, in all 4 syllable nouns, if the last two syllables are consecutives, then the word is a plural of something.

A few examples of verbs:

In line with the rule about suppressing synonyms, in Sarus, the verb "to be" and its variations "am", "be", "is" and "are" is reduced to one word 't'. For example, the phrase "I am good" is the same as "I be good", "I is good" and "I good". Generally in Sarus, for simplicity "I good" is used. If someone asks "Are you good?" or Rr dm ms, someone would reply "be" or 't'. This is also an example of how/why 't' is used to also mean "Yes." If someone isn't good, they would reply "not" or 'd'. Examples of 't' covering several similar means:

I am big
dr t mfr

It is there
df t lm

We are loud
dt t sdr

She is clumsy
ds t mmf

Verbs such as 'go' can be turned into 'going' by putting 't' before it. This literally means 'be go' but translates as 'going'.

The exception here is 'why?' whose opposite is 'because'.

Questions that begin with the question prefix 'rr' generally call for a yes/no response. In Sarus, 'be' and 'not' are used to mean 'yes' and 'no'. Examples:

Another way to answer is to confirm/deny the question:

Answering negative/affirmative in this way is not possible when the other question words are used, such as 'where have you been?' or "what are you doing?". Instead the question words require a more explanatory response, rather than a simple yes or no. Examples:

The question prefix is not necessary when another question word is used, such as 'who is there?', or 'when are we going?'

It works the same with the future prefix 'll' (will):

In order to encode a verb with the past tense, the past prefix or passive participle 'tt' is placed before the verb, like so:

The past prefix is also used to turn a noun into an adjective or superlative form, like so:

The word 'tt' can be used by itself to mean "most".

Future tense is encoded by placing the future prefix or future participle, or 'll' in front of the verb. As with 'tt' the word 'll' also have its own meaning by itself, which is "will". The future participle can also be used to encode a noun, like so:

The number system in Sarus is very straight-foward:

By adding 't' to a digit, one can keep counting higher:

However t = +1 to a digit and not an entire number, so t cannot be used with d, l, or itself, as it breaks this rule, and therefore the following numbers do not exist:

Examples of legit numbers are:

Written Sarus utilises a set of unique glyphs called 'septaglyphs' or 'heptaglyph', words derived from the "septagon" and "heptagon", words for a 7-sided mathematical figure. Each glyph stands for a word rather than a syllable. Septaglyphs are constructed from a septagon figure with a centre point, and with the 7 syllables d, r, m, f, s, l and t going clockwise around the outside points. This 7-sided figure is the basis for Sarus septaglyphs, but it is only a guide shape and is not drawn when actually writing Sarus. 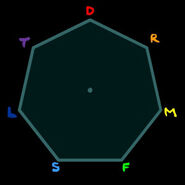 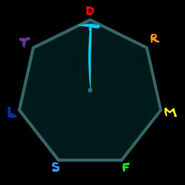 Rule 2: Single syllable words are capped.
Like the 'd' above and the 'l' below, a capped line indicates a 1-syllable word. A cap on a single syllable is like a dot on the letter i.. it's not entirely necessary but makes it easier to see for beginners to see where the line started and ended.
Here, instead of a cap, the stroke is continued to the next syllable. There are strict rules for how these lines are drawn. Without the background, accurate curves are the only means of interpreting a glyph.
This glyph is the word "d" (no, not). 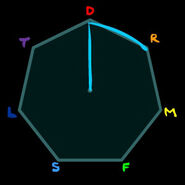 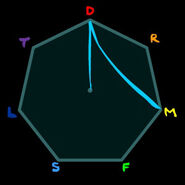 Rule 4: When skipping one syllable, always curve the line inwards.
As shown above, the glyph goes from 'd' to 'm', we've skipped one ('r') so the line curves in.
The glyph above is the word "dm" (you). 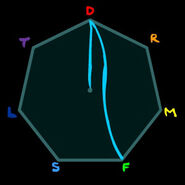 Rule 5: When skipping two letters, the line should have a slender s-shape.
Going from 'd' to 'f' (skips past 'r' and 'm') he s-shape must first curves away from the centre point of the glyph. Therefore, 'df' will be a mirror image of 'ds'.
The glyph above is the word "df" (he,him,it). 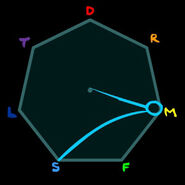 Rule 6: Double syllables are indicated with a little circle.
The circle is on 'm', therefore it's double 'm' followed by 's'. The line from 'm' to 's' is curved inwards.
The glyph above is the word "mms" (roof, ceiling). 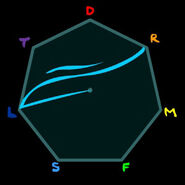 Rule 7: Going back to a syllable is indicated by a little line along that of the second syllable.
For example, in 'lrl', the first line goes from the centre to 'l', then the s-shape line to 'r'. To indicate going back to 'l', draw a smaller line along the 'r' line.
The glyph above is the word "lrl" (know, understand).

Community content is available under CC-BY-SA unless otherwise noted.
Advertisement